by pegasus
I got Mailwasher Free to make sure the program does what I want it to do before upgrading to Pro.

I can't get it to bounce an email. I tried the suggested test of sending an email to myself and then bouncing it -- I even sent myself an email from several different email addresses. NONE of them got bounced.

My ISP is Charter, and I know that Charter's SMTP Server Address is smtp.charter.net. So I have it configured correctly.

Can anyone tell me what's wrong. I certainly don't want to actually pay for this program if it's not going to bounce emails.

by stan_qaz
I guess the first question is why do you want to bounce e-mail messages and a follow on is who is sending you the messages you want to bounce. I realize that the questions don't directly relate to your question but they are important ones.

Most spam is being sent using forged addresses so no program can bounce it back to the sender, all they can do is create a forged bounce message and send it to the address that the spammer has included in the header. Spammers usually use either random made-up addresses or use ones that they have stolen from others, in either case your forged bounce will not go back to the spammer, it will either clog up your ISPs mail server for a while until it is dropped if the address is made-up or it will go to an innocent person if it is stolen. worse many spam services will accept forged bounce messages as proof of abuse and will block the sending mail server, not something any ISP wants to happen as all customer's mail may be affected.

Rarely spammers will collect bounces at a real address, what they do with them varies but it is not a good idea to provide a spammer with the details of your connection that can be extracted from a bounce. Would you tell a known car thief where you park your car?

If you want to bounce to an address that you know is good, an ex-friend for example that will work but if your ex has any sense at all they will be able to see that the bounce is fake.

Now on to a more direct answer, first your ISP may be detecting the bounce as a forgery and a violation of their acceptable use policy and dropping or deleting it, it may be a violation of law to bounce too depending on your location. You can test the bounce by going to the help menu and About, there is a logging box there that you can tick and a link to open explorer. tick the box, open explorer, close the box and bounce one message. you should see a socket-log file appear in explorer. If that file indicates that the message was sent but if it never arrives you can forward the log to your ISP and request they see why their system failed to deliver a message they accepted. Don't forget to untick the logging box.

I'd suggest keeping mailwasher around as it is the best method for preventing cootie infested messages from attacking your system or stealing and reporting information. Instead of bouncing just add the address in question to your blacklist and they will be deleted when you wash your mail. If it is a spam message MW will also help you report it to spamcop.net which is a good way to get off the spammer's list.

by pegasus
I just want to occasionally bounce an email that comes from someone I'd prefer not to hear from. Why does MailWasher offer this feature if it's so easily spotted by the recipient?

I followed your instructions and looked at the log. I'm not sure what I was looking for -- everything looked confusing. There was a lot of Read/Wrote stuff. There was nothing that indicated it didn't go through, though.

by stan_qaz
They offer it because the marketing folks at MW think it is a good way to sell more copies of MW. A lot of users disagree but we haven't convinced the guy that runs MW that we are right. There is a good chance it will come with a warning im the next major release though.

Back many years ago bouncing was pretty cool, it worked quite well as the spammers had to deal with the bounces and would take your name off their list. Now with millions of cootie-infested Windows machines to send spam from the spammer is no longer worried about keeping their lists clean to save time and money since they can steal both with a malware program running on someone else's computer.

Spammers were busy folks and didn't have time to dig through thousands of bounces to dig out the forgeries, now they usually skip it too but once in a while one will decide to punish someone and will borrow your address to use on a spam run. They send a million spam messages with your return address and watch you try to deal with 20,000 bounces, out of office messages and challenge-response verifications. For them it is great fun, for you try hitting delete 20,000 times and to make it more fun read each spam well enough that you don't oopsie and delete a good e-mail in error.

Send your log to the ISP support folks and ask them why it wasn't delivered, if your ISP is like most it will be for the reasons I mentioned. They are usually not very amused though, MW does forge one of their reserved addresses to the bounce.

by mossi
I also found I could not bounce and email (like I used to be able to do before) and I suspect it is Vista. I have the program on 2 computers as allowed by a purchase. XP does not object to bouncing , but Vista does.
I agree with your opinion on bouncing nevertheless. It was good years ago to get rid of a troublemaker, but now I go to the Server if I really have to and delete a mail address from there if they are a nuisance. I do not want to increase spam by alerting them to me.

by BigKahuna#7
Mailwasher Pro will not bounce emails I select? What am I doing wrong?

by TrustFire
What account are you using, for example — Gmail, Rediff, Yahoo, etc., etc?

by BigKahuna#7
I use Mozilla Thunderbird, my ISP is volcano.net.

by TrustFire
Did you try the following settings on your MailWasher for your Volcano account:— 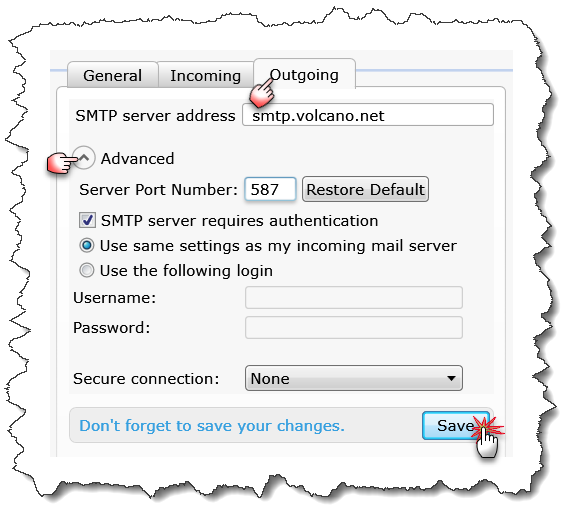 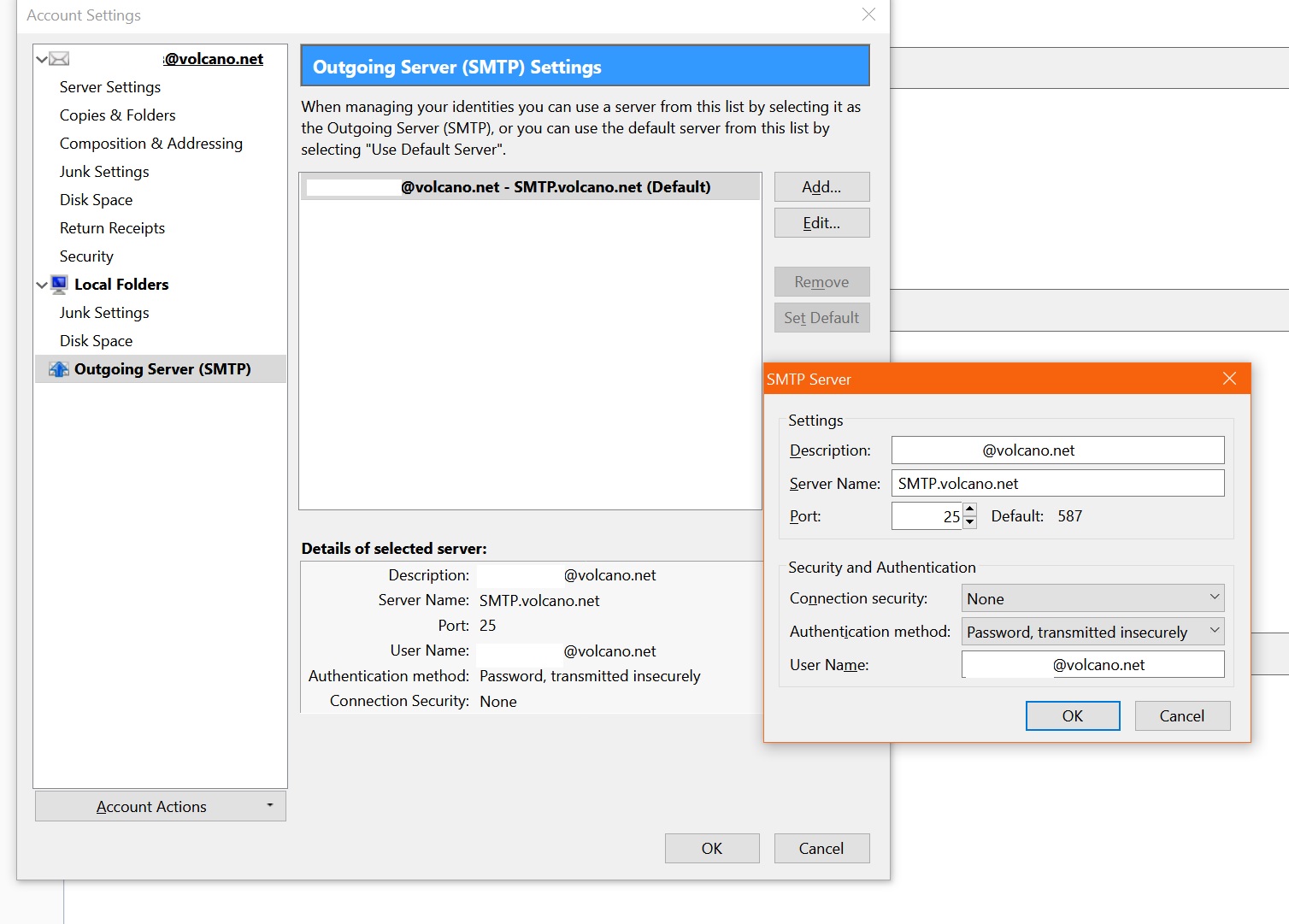 I reconfigured my mail settings, and tried sending an email to myself from my old Hotmail account I had, and I marked the email to be bounced and it failed to bounce the email.

Can't recognize your screenshot — does it belong to Mozilla Thunderbird?

BigKahuna#7 wrote:<snip> and I marked the email to be bounced and it failed to bounce the email.

Merely marking the message does not bounce it — you need to also then, click the Wash Mail button.

by BigKahuna#7
Thanks, yes that was Mozilla, I have now configured MailWasher and tried sending three more emails and mark them to be bounced, when I did that a text came up that said they were going to be deleted? And I checked and they never got bounced. I appreciate you trying to help me thank you.

[/center]
When you mark your messages to be bounced, they should look grayed out (as the last 3 messages, illustrated above) — messages would be deleted only if they are marked for deleted (which is independent of the bounce feature.)

Just to be clear . . . . . . can you post a link, pointing to the MailWasher Edition which you are using.

by BigKahuna#7
I've tried those steps, mark them for bounds and then selected the wash mail option.

by TrustFire
In that case, your ISP could be blocking bounces — you can workaround their policy by using the superior SMTP services of a free Gmail account.

Configure the Incoming tab on MailWasher for your ISP, Volcano — and, the Outgoing tab for Gmail.
All times are UTC+12:00
Page 1 of 2
Powered by phpBB® Forum Software © phpBB Limited
https://www.phpbb.com/