why is there no more function for deleting the mails from the blacklist automatically?
Mails are these in the list you shall delete directly all.
This was a good function of the old version

steve1 - As per the replies, you see there are options above using Custom Filters. The idea is now though that AutoDelete (found under Settings >> Spam Tools >> Spam Ratings) isn't per Spam Tool anymore, it's based on the final outcome of the email.

One of the biggest changes between the old version and the new is the way in which emails are processed to their final outcome. In the old version it was managed by a complicated system of rules, and each tool (Filters, DNSBLs, Friends Lists) would have its own order of precedence.

So for example, in old MailWasher if the sender was in your Friends List then the email was always considered good, though you could write a filter to take precedence over this. Even if the Bayesian, DNSBL and FirstAlert thought that email was spam, it would always be good.

That works fine until you get into more complicated situations, such as spoofed senders to match the users own address, spam from infected contacts and so on. We decided to try a shift away from complicated rules based system and instead move into weighing tools together.

Each Spam Tool now applies it's own weight to the email, 0 is the mid point so considered neutral, a negative number is spammy and a positive number is good. The higher the number away from 0 the more likely it is to be spam or good. If the final result is between 0 and -/+50 MailWasher treats the email as unknown, that is to say, it might be good or bad, MailWasher doesn't know for sure.

So case in point, the email starts at 0, and matches your Blacklist, this applies a weight of -50 which makes the email spam,

You can of course, alter the weights yourself. So if you want a Blacklisted email to be treated more aggressively then under Settings >> Spam Tools >> Spam Ratings >> move the slider across to -200. That pretty much means any email from a Blacklisted sender would be spam unless a number of other sources said otherwise.


A situation where this would not delete automatically, is if the Bayesian thought the email was good, but the sender was blacklisted. As you can see this causes a conflict, and the final weight of the email would likely end up less than -200 and not be deleted automatically. However I'm inclined to think this a good thing, as it helps protect against any erroneous blacklisting.


I only just woke up from a nap, so I hope this makes sense

It was such good advice it needed repeating

by steve1
Thanks everyone for the fast help!

I have the filter inserted, great!

by Sidewinder
Just a couple of words of caution about using the Automatic Delete option(s), e.g. overall setting based on Total Evaluation score or Filter, Rule based.

Messages downloaded into MWP2010 from the mail server are most likely only partial messages. This is dependent on the user settings shown in the screen cap.
Since the overall performance is altered by the number of lines for each message there is a tendency to reduce it. The lowest suggested setting is 80 lines.

If you enable the auto delete option(s) when it gets triggered the message is moved to the Recycle Bin and deleted from the mail server without further user action.

If the user then discovers that a critical or otherwise wanted message was inadvertently auto deleted they can go to the Recycle Bin and perform a Restore. Just keep in mind that the Restored message will only contain the number of lines that were downloaded based on the Spam Throttle setting. You may be able to use the fragment to get back to the original sender and request a resend. That is not always possible. You also need to alter the settings so that you don't get a repeat auto delete the second time. 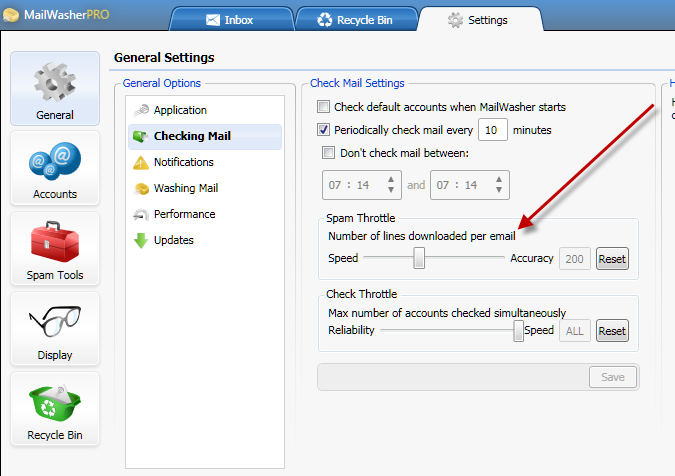 Mail is not deleted and displayed as Blackist, however!

What do I make wrong?
Steve

by anniebrion
Auto-delete will not run when you add a filter then go back to the inbox. Just press C then Y and re-fetch your emails by pressing the "Check default email accounts" button.

Auto-deletes do run on a fetch or auto-fetch but no a revaluation.

by steve1
Hello anniebrion,
I have understood this.
However also new mails are not automatically deleted although in the Blacklist available. This with the filter does not work.

by anniebrion
Can you post a screen grab of your filter settings?

Do the emails have the filter name as their status in the inbox?

by rusticdog
I had one ready to go 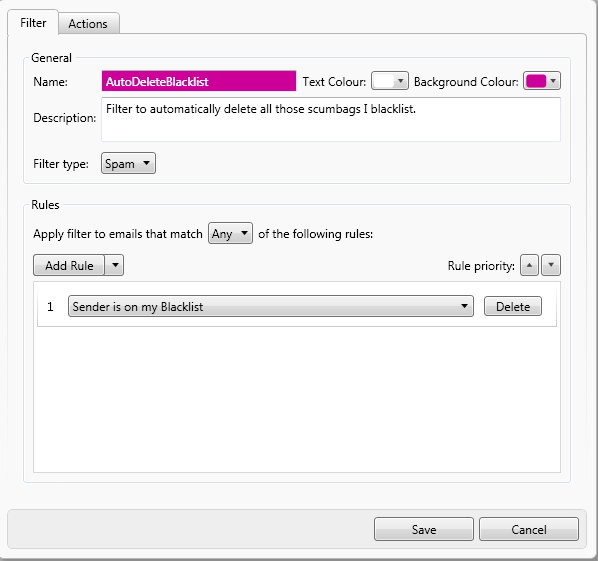 by steve1
Thanks all, yes, I have adjusted this. Mails only are displayed as a blacklist but not deleted.

steve1 wrote:Thanks all, yes, I have adjusted this. Mails only are displayed as a blacklist but not deleted.

Because they display as Blacklisted and not displaying the Filter Name in the Status field, that implies that the Filter simply isn't matching those emails.

Can I ask, the blacklisting entry is just a standard email address, not a wildcard etc.. ?

this is a normal standard email. The Blacklist ist from version 6.53.
I have tried my company email address.
All times are UTC+12:00
Page 1 of 2
Powered by phpBB® Forum Software © phpBB Limited
https://www.phpbb.com/